Virtual AGM? Get real or maybe even go hybrid...

The AGMs of most companies in the UK (like in several other countries) run on Lumi's technology, whether that be a physical meeting with poll cards, voting keypads or online as well as mobile or indeed a combination of any of those formats, the so-called hybrid AGM. So clearly I do have a horse in this race, however... There are two points I would like to make on this subject, raised again in an article in this weekend's Times. 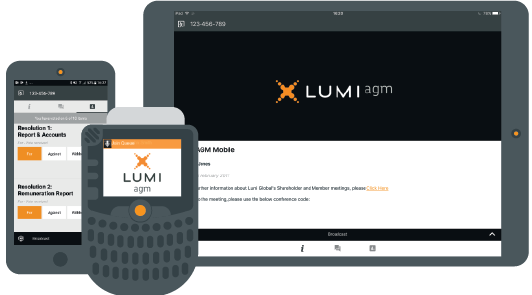 Firstly, the debate seems to be quite polarised around the two positions of (i) preserve the status quo and maintain the current physical only AGM format or (ii) ditch the physical meeting and run the entire proceedings online only. However the reality is that the trend in most countries including the UK (but with the notable exception of the US) is moving towards the hybrid model. It is hard to make a corporate governance case against the hybrid model as it preserves the ability of the shareholder to pose questions face to face to the companies they own while also making the meeting far more accessible to the vast majority of shareholders who are unable to attend physically. My suspicion is that over time it will become increasingly difficult for companies to justify not enabling the technology which facilitates remote online attendance.

Secondly, the criticism of the virtual meeting format has the underlying assumption that by definition remote online attendance is inferior and restricts shareholders from holding the board to account. From a technology point of view this is not necessarily the case. The technology exists to permit quite sophisticated Q&A and messaging. The questions themselves can be as transparent or moderated as is deemed appropriate. All shareholders who log in and attend are authenticated and registered so that they can vote the number of shares which they legitimately own. This also means that the right to ask questions can be limited to real registered shareholders and so those posing questions can not necessarily hide behind anonymity. In some cases guests can also attend and view the proceedings online, but they are obviously unable to vote and their ability to ask a question can be removed or restricted. If there is a concern that “awkward questions weren’t being vetted and filtered out,” then everything in the platform is tracked and recorded for auditing purposes as is the case today to facilitate scrutineering of the results of the polls themselves.

I must say that there is a trend here which is playing out globally and feels unstoppable. The real focus now should be on proposing best practice. What is important is to understand the capabilities of the technology and the different options that exist about how it can be deployed and then to propose best practice to increase the relevance and purpose of the AGM while reaching as wide an audience as possible.

If you would like to learn more about Lumi's Hybrid or Virtual AGM options get in touch.

Integrating the voice of your membership into the meeting

Discover how a virtual mic could transform your meeting

What makes an AGM technology provider worth the investment?