⟵  Back to blog

The Future of Belgian Shareholder Meetings – Are You Ready?

Have you ever considered hybrid or virtual voting during your next Annual General Meeting? What is hybrid voting? What are the legal considerations?

On Friday, February 16th Lumi participated in a debate about the future of Belgian shareholder meetings.

We discussed recent legal developments, focusing on the organizational stakes of virtual and hybrid AGMs. The debate also pointed out the role of proxy advisors and institutional investors in the trend away from traditional AGMs. The event, held at Euronext, was co-organized by Lumi, Company Webcast and GUBERNA. The panel debate, coordinated by Annelies de Wilde (GUBERNA) included Notary Tim Carnewal (Berquin Notarissen), Kirsten van Rooijen (Computershare), Patricia van de Wiele (Proximus) and Richard Taylor (Lumi). At the registration everyone received their personal login to vote and ask questions using a voting keypad or the Lumi AGM app.

Richard Taylor (Lumi) explained the importance of understanding the difference between virtual and hybrid AGMs. At a hybrid meeting, one can have shareholders vote in the room – with their device or a keypad – and remotely, following the meeting on their device with an optional webcast integration. At a virtual meeting, remote participation is the only option.

Kirsten van Rooijen (Computershare) suggested a shift from the traditional in-room only AGM, toward meetings that are hybrid and virtual. This shift mirrors a decrease in on-site meeting participation and an increase in the number of remote proxy votes from meeting attendees. The U.S. is the trend-setter in virtual meetings, as discussed in detail here. It’s worth nothing that it is not only technology companies holding hybrid and virtual AGMs; Jimmy Choo held their first virtual meeting in 2016 in the UK. Kirsten notes that many proxy advisors have come out against virtual-only meetings but may support hybrid meetings in that they offer more options for shareholders to participate.

With new trends comes new technology (or is it the other way around?). So, how can you hold a virtual or hybrid AGM?

During the event attendees registered using the newly developed Lumi Signature software, which allows one to sign directly on a tablet, conveniently eliminating paper from the registration process. Paper poll-cards are also replaced by an electronic voting system with a “smartcard” containing shareholder details and Lumi’s native AGM app or web app can be accessed with a personal login. With 85% of votes “in-favor” during the debate, we can reasonably assume that the evolution toward hybrid meetings is inevitable in Belgium. In fact, 40% of the audience believed that their company will have a hybrid meeting within the next three years. 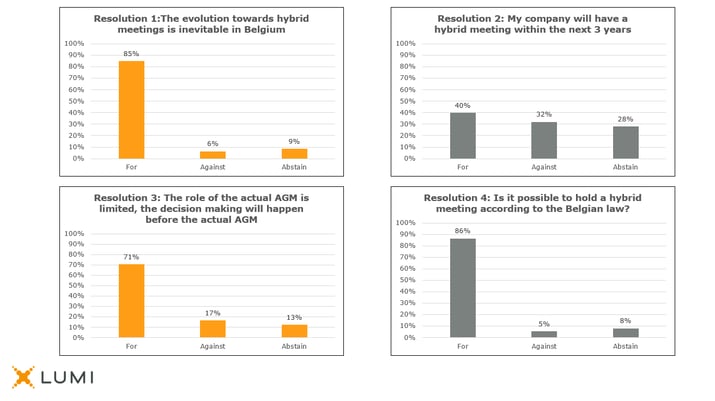 All of the above is very nice, but what does Belgian law allow?

Notary Tim Carnewal (Berquin) highlighted that Belgian law currently doesn’t allow virtual-only general meetings; directors, presidents, vote counters, secretaries and auditors must be physically present at the meeting. A hybrid meeting would be possible. However, a company must verify the capacity and identity of shareholders using an electronic communication device. A company must also change their bylaws to accommodate hybrid meetings. A shareholder has to be capable of following a meeting directly, simultaneously, and uninterruptedly and must be able to vote on all points on an agenda of the general meeting. The conclusion is interesting given that the legal framework is in place.

Patricia Van de Wiele (Proximus) explained the importance of having the right documentation (annual report, corporate governance statement, etc.) before the event at a traditional AGM. Here one may notice that there is already a trend toward digital as most of the documents are electronic. During the AGM, written questions are sent to the board and voters may ask proof of voting immediately after the meeting. At the end of the meeting, mandates are published, and the organisation can expect an audit by proxy voters on the voting results.

In conclusion, there is some controversy and legal uncertainty in organizing virtual-only meetings, but hybrid meetings are very supported. How long until physical only meetings will be considered poor Corporate Governance practice?

Watch the webinar recorded after the event here and contact us if you have any questions.

To find out how Lumi’s software and hardware can help your AGM run smoothly, engage more shareholders and allow remote attendance, speak to us today.
Contact us
⟵  Back to blog
Share
Recent

It’s Really Not That Different